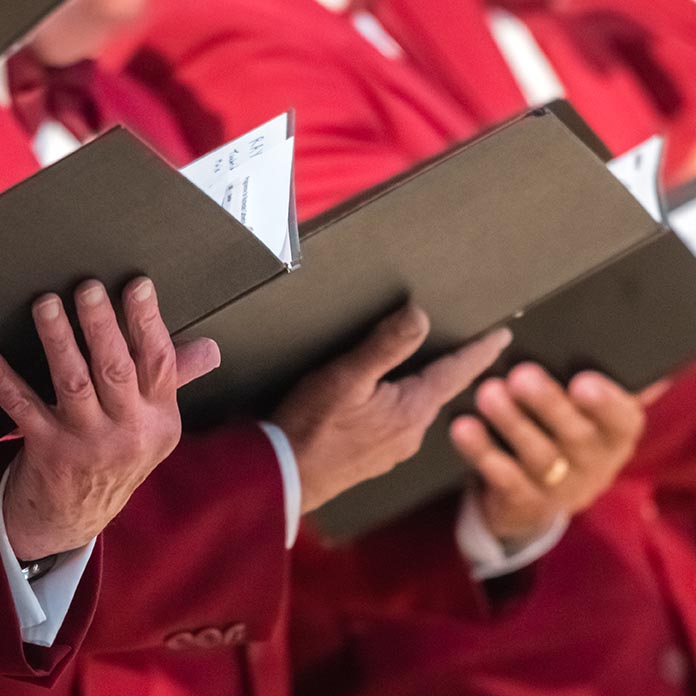 ‘The Leeds Philharmonic Society is the senior choir in the city by date of foundation and by virtue of its continued and very distinguished programme sustained annually since 1870.’

The LPS was the natural evolution of the Leeds Amateur Vocal Society, a male voice choir of approximately 60 formed in the early 1860s. In 1870 it was decided to admit women to the choir and to formally rename it the Leeds Philharmonic Society. A further amalgamation took place in 1896 with the Leeds Subscription Concerts.

Leeds Philharmonic Chorus now comprises over 130 singing members regularly performing at Leeds Town Hall. Performances are often jointly promoted with the Leeds International Concert Season and the BBC. Repertoire is extensive, combining both tradition and innovation involving a constant quest for excellence as well as enterprise.

In recent years the chorus has recorded works such as Stanford’s Stabat Mater and Te Deum for Chandos, Walton’s Gloria and Belshazzar’s Feast for Naxos and The Messiah for CMI Records.

Early in its history the chorus regulary gave performances of new works conducted by composers such as Elgar, Parry and Sullivan. More recently, the chorus gave the first broadcast performance of Geoffrey Burgon’s Requiem in 1977 and has premieredcommissions from James Brown, Donald Hunt and Philip Wilby.

Unfamiliar and demanding works have also been a frequent feature of programmes. Recent examples include Franz Schmidt’s The Book with Seven Seals, Rachmaninov’s The Bells (with the St Petersburg Symphony Orchestra), Adams’ Harmonium and Wilby’s Bronte Mass (world premiere). However, the chorus is no stranger to ‘cross-over’ music: it was a mainstay of Leeds Opera in the Park which ran between 1998-2014. They took part in a national tour of The Queen Symphony (2006/7) conducted by Tolga Kashif.

As well as performing concerts in Leeds Town Hall, the chorus has performed in many other prestigious venues including the Royal Albert Hall (London), Bridgewater Hall (Manchester), Symphony Hall (Birmingham), The Sage (Gateshead), the Liszt Academy (Budapest) and Stephansdom (Vienna). To hear a sample of our recording, as broadcast on Classic FM, click here)

David Hill is Leeds Philharmonic Society’s Music Director and Conductor. Widely recognised as one of the leading choral conductors in the UK, David’s fine musicianship was recognised by his appointment to the post of Chief Conductor of the BBC Singers in 2007, and he is also Associate Guest Conductor of The Bournemouth Symphony Orchestra. Joseph Judge is the current Chorus Master succeeding Richard Wilberforce in 2018.

Easter 2009 saw the chorus touring Poland (supported by Yorkshire Forward) including the Polish premiere of Karl Jenkins’ The Armed Man – a Mass for Peace with the Capella Cracoviensis Chamber Orchestra.

In July 2011 Leeds’ twin city Dortmund welcomed us for three concerts to sung capacity audiences. We started with English and American choral music in the beauiful Reinoldikirche, then joining seven local choirs and the Dortmunder Philharmoniker under the baton of Jac van Steen for two performances of Edward Elgar’s The Music Makers in the Konzerthaus (review).

In July 2012 the Phil presented a special concert in celebration of the Diamond Jubilee of Her Majesty The Queen, including Handel’s classic Coronation Anthems from 1727. In October followed an evening of English Music headed up by Benjamin Britten’s St Nicolas Cantata and other works by Gustav Holst and Sir George Dyson under the direction of interim Chorus Master, Darius Battiwalla, who worked highly effectually with the Chorus over the course of the 2012/13 season.

In 2014 we were delighted to be asked to perform the epic Britten’s War Requiem in Belfast, with orchestra from both north and south of the border. A unique collaberation. The huge production of Mahler 8 in 2016 was a huge success and was followed by Howells Hymus Paradisi in late 2017. In 2018 we were invited to tour with the Bruckner Orchestra to Edinburgh, Middlesbrough and Sheffield with Mahler 2.

In between the big productions we regularly perform smaller concerts in the 2 local Leeds cathedrals, Bolton Abbey and the Leeds Prison as part of our outreach programme.

If you have any queries about the history of the Phil, please contact the Chorus’ archivist who will be delighted to help you.